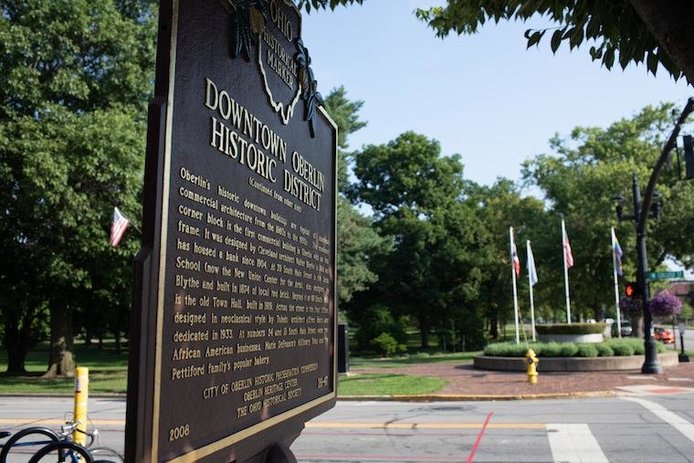 What began as an aspiration to open a history museum in Oberlin morphed into a series of app-based tours that aim to represent the city’s diverse history.

Some of the most repeated Oberlin College history tidbits may be these: that it was the first college to admit all students without respect to race, and it was the first to admit women alongside men. But in addition to those defining features, the college and town have a rich history that bears additional explanation.

So they banded together to create the Coalition for Oberlin History , whose purpose is “to tell Oberlin’s stories in the plural,” says Kornblith.

While the coalition explored the idea of creating a brick and mortar museum to tell the city’s stories, finding a location to house the project proved to be a challenge. But during a sculpture garden tour that used an app to educate users, Kornblith and Lasser stumbled upon the technology they realized could be useful in educating about history—without the expensive overhead of a physical museum.

“We saw great possibilities with using an app—we could easily create multiple tours. I looked into the cost, and the app was free to use. So the price was right,” says Kornblith.

The app’s structure also provided an ideal way for the coalition to easily serve various audiences. Because of Oberlin’s varied history, it was important to the group to highlight a range of Oberlin experiences.

As of now, the group has created four tours that focus on the following: Oberlin schools, Westwood Cemetery, Groveland Street’s African American community, and Oberlin College.

A fifth tour, led by Lasser and a current Oberlin student, covering the history of the town is in the works. Kornblith says the group has discussed producing additional tours in the future.

Produced by Kornblith and Grossi, “Oberlin College: The First Century” takes users on a walk on and around Tappan Square, with eights stops in total. It introduces visitors to the early history of the college, including the founders’ decisions to admit women alongside men and the role of students and faculty in the struggle against slavery in the decades leading up to the Civil War.

The tours are not only a resource for the public. Grossi, who provides instructional sessions for classes including first-year seminars and a history research methods course, also sees a place for them in the classroom.

“It is my intention to either reference or use the tour during instructional sessions or presentations when discussing 19th century Oberlin history,” Grossi says. “The tour would provide another method to share our history with students. I would also encourage students to try all the tours created by members of the Coalition for Oberlin History.”